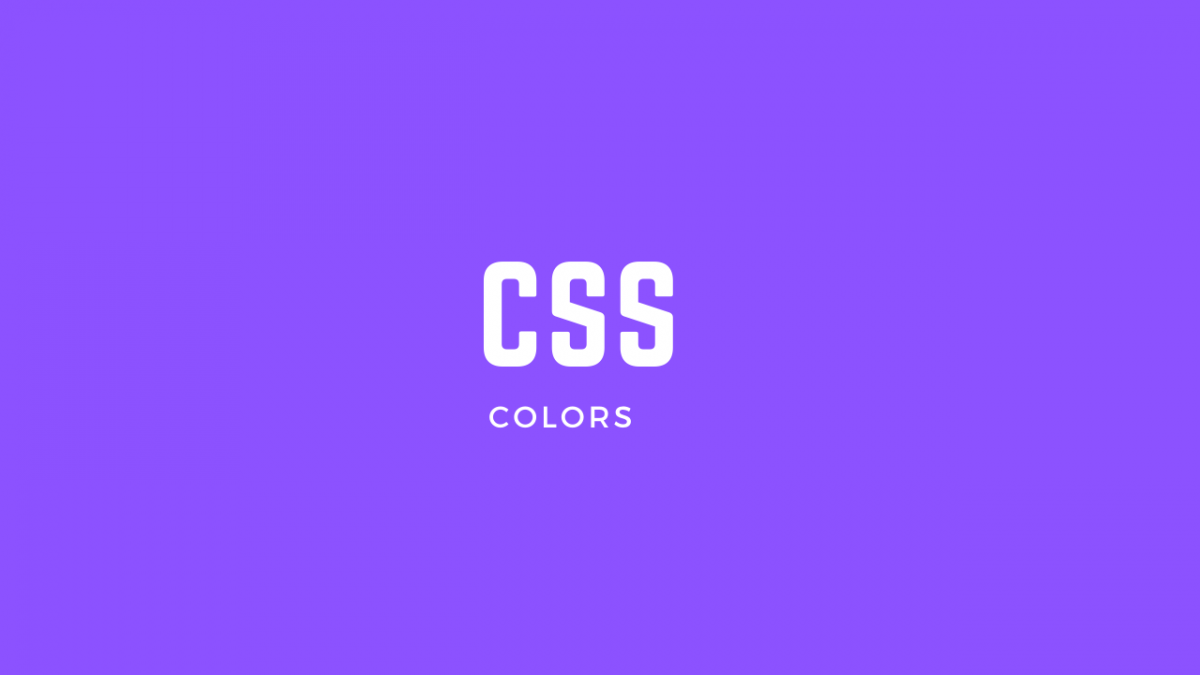 CSS supports a wide variety of colors. These include named colors, like blue, black, and LimeGreen, along with colors described by a numeric value. Using a numeric system allows us to take advantage of the whole spectrum of colors that browsers support. In this lesson, we’re going to explore all the color options CSS offers.

Colors in CSS can be described in three different ways:

We’ll learn about and explore the benefits of each of these in depth. Using only named colors, you may feel like you’re picking labeled crayons out of a box. By the end of this lesson, you’ll feel like a painter mixing paints on a palette.

Before discussing the specifics of color, it’s important to make two distinctions about color. Color can affect the following design aspects:

Foreground color is the color that an element appears in. For example, when a heading is styled to appear green, the foreground color of the heading has been styled.

Conversely, when a heading is styled so that its background appears yellow, the background color of the heading has been styled

In CSS, these two design aspects can be styled with the following two properties:

One syntax that we can use to specify colors is called hexadecimal. Colors specified using this system are called hex colors. A hex color begins with a hash character (#) which is followed by three or six characters. The characters represent values for red, blue and green.

In the example above, you may notice that there are both letters and numbers in the values. This is because the hexadecimal number system has 16 digits (0-15) instead of 10 (0-9) like you are used to. To represent 10-15, we use A-F. Here is a list of many different colors and their hex values.

You can include hex colors just as you would include named colors: background-color: #9932cc;.

There is another syntax for representing RGB values that uses decimal numbers. It looks like this:

Here, each of the three values represents a color component, and each can have a decimal number value from 0 to 255. The first number represents the amount of red, the second is green, and the third is blue. These colors are exactly the same as hex, but with a different syntax and a different number system.

In general, hex and decimal color representations are equivalent. Which you choose is a matter of personal taste. That said, it’s good to choose one and be consistent throughout your CSS, because it’s easier to compare hex to hex and decimal to decimal.

The hexadecimal and RGB color system can represent many more colors than the small set of CSS named colors. We can use this new set of colors to refine our web page’s style.

Recall that we started with named colors, converted them to hex, and then converted some of the hex colors to decimal. Unless we made a mistake, all of the colors should still be the same, visually. Let’s use our broadened palette to make some more refined color choices.

The syntax for HSL is similar to the decimal form of RGB, though it differs in important ways. The first number represents the degree of the hue, and can be between 0 and 360. The second and third numbers are percentages representing saturation and lightness respectively. Here is an example:

Hue is the first number. It refers to an angle on a color wheel. Red is 0 degrees, Green is 120 degrees, Blue is 240 degrees, and then back to Red at 360. You can see an example of a color wheel below:

HSL is convenient for adjusting colors. In RGB, making the color a little darker may affect all three color components. In HSL, that’s as easy as changing the lightness value. HSL is also useful for making a set of colors that work well together by selecting various colors that have the same lightness and saturation but different hues.

All of the colors we’ve seen so far have been opaque, or non-transparent. When we overlap two opaque elements, nothing from the bottom element shows through the top element. In this exercise, we’ll change the opacity, or the amount of transparency, of some colors so that some or all of the bottom elements are visible through a covering element.

To use opacity in the HSL color scheme, use hsla instead of hsl, and four values instead of three. For example:

The first three values work the same as hsl. The fourth value (which we have not seen before) is the alpha. This last value is sometimes called the opacity.

You can think of the alpha value as, “the amount of the background to mix with the foreground”. When a color’s alpha is below one, any color behind it will be blended in. The blending happens for each pixel; no blurring occurs.

The RGB color scheme has a similar syntax for opacity, rgba. Again, the first three values work the same as rgb and the last value is the alpha. Here’s an example:

Alpha can only be used with HSL and RGB colors; we cannot add the alpha value to color: green color: #FFFFF.

There is, however, a named color keyword for zero opacity, transparent. It’s equivalent to rgba(0, 0, 0, 0). It’s used like any other color keyword:

There are four ways to represent color in CSS:

Great job! Feel empowered to add a bit of color to each of your projects!

KM Mahfuz Ul Islam is the Founder and CEO of Mahfuz Ninja, Inc. You can call him the SEO Ninja! With over 10+ years of experience in the Digital Marketing space, he and his team are catering to the inbound marketing needs of several 6 to 7-figure revenue-generating businesses. He is also a father of 3 amazing kids Irush, Zayef, and Zayan. A workaholic with an interest in traveling the whole world in his lifetime!
Login
0